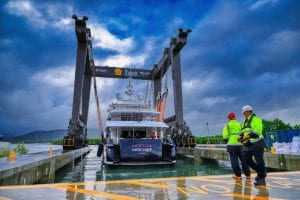 Last week, BSE Cairns Slipways raised their first superyacht out of the water, the largest in the Australian charter fleet – 54 metre Ahoy Club’s Motor Yacht Mischief. It was a monumental day lifting Mischief with BSE’s “world’s largest” mobile boat hoist, capable of raising vessels up to 1120t. The smooth-running operation was just the beginning of a busy month of projects due to be completed in the Cairns yard utilizing various local businesses and filtering down to support even more in the regional economy. 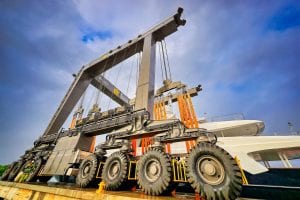 Captain Luke was impressed with the facility, saying it was a great experience. “This is a wonderful opportunity to showcase our regions capabilities not only at BSE, but local manufacturing as well and berthing at the floating wharf for in-water repairs”, said Keller of BSE.

“When the Federal government invested in the Cairns Marine Precinct nobody had heard about CV19 and yet that initiative gave confidence for our investment which has resulted in this new work for Cairns. The support Mischief has shown for the investment we made will encourage further customers and further investment in both infrastructure and skills”, stated BSE Maritime Solutions owner Justin Parer. Carrie Carter, Chairperson of the SuperYacht Group Great Barrier Reef said “this is a major achievement for BSE and the Port of Cairns and cements our regions standing as a prime destination “one-stop-shop” for superyachts to homeport in, in the Asia Pacific region.” 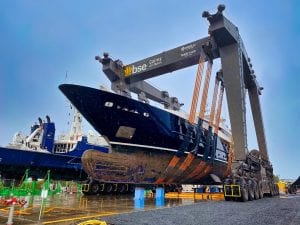 A project of this type in such a competitive Australian market comes with big expectations, but also the promise that exceptional service could result in more work for the Ahoy Club M/Y Mischief. Also owners of the 70m Lurssen built, Motor Yacht Coral Ocean and with many more high-net-wealth yacht-owner contacts involved in their elite “Ahoy Club” superyacht charter company. BSE Maritime Solutions Cairns, Brian Keller will do his utmost to ensure excellence is delivered along with attentive service in yard. 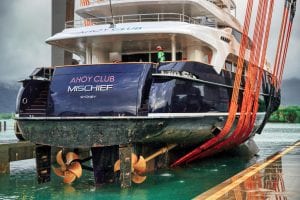 Manager of the SuperYacht Group Great Barrier Reef, Joanne Drake said, “with The America’s Cup still on track to be held next March 2021 and The Olympics in Tokyo in July/August 2021, our region holds some major drawcards to offer the global fleet as well as planning a necessary refit for the vessels 2-3 year itinerary here. It will be an added bonus for us if the America’s Cup is won by a South Pacific contender for another event here too! We have the World’s largest Mobile Boat Hoist here in Cairns, Australia’s largest superyacht dock at Cairns Marlin Marina! (140 metres) and of course the magnificent destination encompassing the Great Barrier Reef, our cultural heritage and the world’s oldest rainforest!” 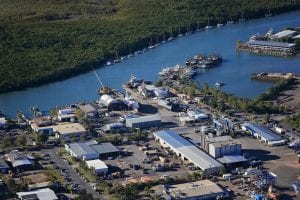 David Good, CEO of Superyacht Australia said “Australian shipyards and marinas have been fortunate not to require closure or restrictions. This is a result of Australia’s success in reducing COVID 19 cases without a lockdown.”

Foreign superyachts can enter Australia after receiving exemption and crew completing 14 days in isolation on board commencing at the last port of departure. Vessels are encouraged to cruise slowly so that crew can step ashore on arrival if 14 days are spent in transit to Australia.

The Super Yacht Group Great Barrier is a non-profit, industry consortium, proactive in promoting the GBR region as the perfect home port for superyachts. It attends major boat shows around the world, such as The Monaco Yacht Show, Ft Lauderdale Boat Show, The Singapore Yacht Show and Rendezvous in Tahiti, Thailand and Fiji.  With the assistance of the Cairns Regional Council, Ports North and Tourism Australia the group also hosts numerous inbound familiarisation tours.