Super yachting has come of age on the Great Barrier Reef as the industry celebrates 21 years of bringing the world’s biggest and best boats to Cairns. 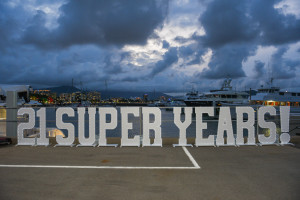 Cairns has always done things its own way.

So it’s no surprise to learn that the city’s multi-million dollar super yacht industry began with a couple of mad keen boaties and some big ideas.

In the lead-up to the 2000 Sydney Olympics, Ley James was manager of Cairns Slipways and Stewart Smith owned Cairns Wholesale Paints.

Both were convinced the underwater jewel on their doorstep — the Great Barrier Reef — was the equal of anything anywhere in the world and wanted in on the global super yacht action.

“There were a number of groups around the country becoming interested in super yachts and looking at forming groups, but it was going round and round in circles,” says Ley, who attended early meetings in Sydney. 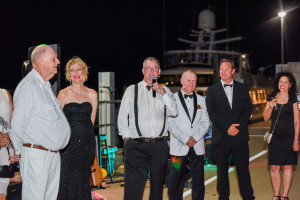 “I said ‘if you don’t get your act together, I’ll go home and do it myself’, which I did. We formed the group (in Cairns) and we’re still the largest group of that type in Australia,” he says.

“We established Cairns as the South Pacific super yacht hub.”

A non-profit group formed to meet the needs of super yachts, crew and local businesses, the Super Yacht Group Great Barrier Reef (SYGGBR) was founded in 2000 and quickly made its mark.

“We had inquiries from America and England wanting to know how to set up groups of that kind. We were (leading the way),” says Ley, its founding chairman.

This month, SYGGBR is celebrating its coming-of-age and remarkable foray into the world of luxury yachts with a 21st birthday dock party. 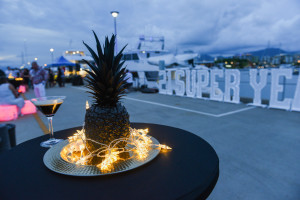 Ley, a life member of SYGGBR and former director of the International Superyacht Society, first started going to international boat shows in the 1990s. Stewart was doing the same.

“It didn’t take much encouragement for Ley or I to get to a boat show because we just loved boats,” says Stewart, also a life member.

“For a couple of years we did it on our own, but we used to wear Cairns Slipways shirts, so we had the one focus.”

Ley says Cairns Slipways was already working on large yachts and was keen to drum up more international business. 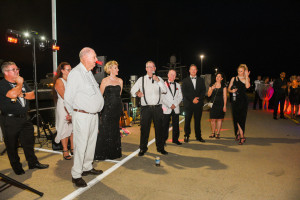 been refitting yachts as early as the mid-80s and getting bigger and bigger ones. We carried out major refits on 60m yachts.”

In 2001, Ley took a punt on the Monaco Yacht Show and booked a stall. 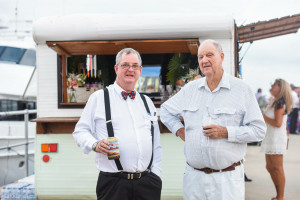 “It was fairly small at the time, but had the look of becoming something good. It’s now ten times what it used to be,” he says.

The Aussies had to learn fast.

“We said we need to be professional. We need to promote this to the world,” says Stewart.

“You need to understand the super yacht industry, what their needs are. It’s not all price. They need quality and they need it delivered on time.

“The first two years, Ley and I walked the shows and we’d hire a car and drive up and down the Mediterranean. You’ve got Monaco, Cannes, St Tropez, Sorrento, Barcelona. There are berths everywhere.

“We would go a week before the show and network, then invite them to visit our stall, or we’d go a week after we’d seen them and follow up.” 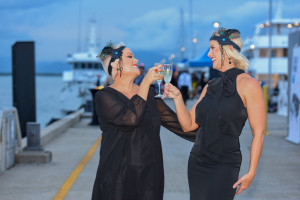 They would also bring a taste of home.

“We used to take Peter Lik (landscape photography) books, boxes of Vegemite sachets to give away, cartons of XXXX Bitter and bottles of Bundaberg Rum.

“We had to give it that Australian theme,” says Stewart.

Ley says it took a while for Americans and Europeans to catch on.

“When we first started going over, people had heard of the Barrier Reef and Sydney, but when you talked about Cairns and Queensland, they didn’t have a clue what you were talking about.

“Going south of the equator was like going to the dark side of the moon for them,” Ley says. 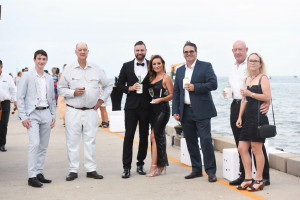 The similarity of the names Cairns and Cannes added to the confusion.

“They used to say is that Cannes, C-A-N-N-E-S, just down the road?” says Stewart. “We’d say no. Some didn’t even know where Australia was.”

The job of luring boats Down Under was helped by captains and crew, many of them from Australia and New Zealand.

“We would sell them the idea, then they would go to their boss and say ‘here’s a two year schedule’.

“They love coming to a home port of their country.”

Back in Cairns, there was an urgent need for new infrastructure.

While NQEA-owned Cairns Slipways could accommodate large boats for refits, the city had no suitable marina or super yacht berths.

“If a boat came (to Australia), we didn’t want them to go to Brisbane or Sydney to refit. We wanted them in Cairns,” Stewart says.

“So we convened a meeting in (former Cairns Port Authority chief executive) Bob Manning’s office — Bob, myself, Ley James and seven captains from super yachts. They all got up and said ‘we’ve sailed past Cairns because there’s no berthage’.

“We weren’t geared up for it. That’s when Bob said ‘build it and they will come’. He got the picture.”

“There’s been some fantastic members of that group,” Stewart says.

“It’s been a very, very loyal group that has always been encouraged to support each other.

Another steady hand on the tiller during the early days was Deb Maguire from the Department of Industry and Development, which provided an initial grant for office space and administration.

“We were doing some very big refits, up to $10 million. The Princesa Valentina was the biggest refit. That was the one that really put us on the map and gave us a leg up because of the amount of work and the quality of the work,” Ley says.

“The captain at the time told us we were the world’s best kept secret.

“We gradually put together a lot of talent. It didn’t happen overnight, but we were as good as anything in the world and better than a lot. We got to the stage where we were World’s Best Practice.

“It’s a very specialised industry and part of the reason for forming the group was to instil in people the level of quality required and how you conduct yourself on these vessels. It was as much educational for a lot of companies as anything.”

As well as attending international boat shows, SYGGBR heavily promoted the region through yachting magazines, agents, maritime businesses, crew networks and even fronting up to boats.

“A lot of yachts came down here for the Olympics and later, for the America’s Cup in New Zealand. We spent a lot of time going over there, encouraging boats to come here, which we did quite successfully,” says Ley.

They even flew to Tahiti, where they met yachts and diverted them to Cairns — creating a wave of economic opportunity across the Far North.

“It’s not just refits — it’s florists, taxi drivers, providores. Some of these yachts can spend $10,000 a day without refits.

“The big yachts carry big crews. Depending on size, they carry between 12-60 crew. One time, we got the captain to monitor crew spending over a three week period and they were spending $30,000 a week in Cairns themselves.”

Australia has also relaxed rules for foreign-flagged charters, offered more anchorages on the Great Barrier Reef and developed a new cruising itinerary from Cairns to Tasmania — paving the way for more visits, longer stays and a booming super yacht economy.

“Currently, we have under one per cent of the super yachts in the world visit Australia.”

SYGGBR chairperson Kathleen Ferguson says it’s not hard to see why Cairns is one of Australia’s busiest super yacht ports.

“Not only do we have two world wonders — the Great Barrier Reef and Wet Tropics Rainforest — on our doorstep, but the supportive infrastructure, services and experience super yachts look for,” she says

“The super yacht industry is set to grow, so it’s imperative we have members on board to assist the vessels with their needs. It’s a good time to be a part of a growth industry.”

Group manager Joanne Drake — who has 20 years in the industry and more than a decade on super yachts looking after billionaire owners, their families and friends — expects a doubling of visits to the region post-COVID.

“The custom clearance port of Cairns has the best offering I have seen anywhere in the world,” she says. 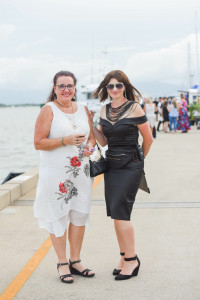 The city also boasts the South Pacific’s largest mobile boat hoist, an international airport and super yacht crew running businesses to provide “the most exceptional service and etiquette around”.

“We have the only place where two World Heritage sites meet, the chance for unimaginable cultural immersion, mind-blowing diving and snorkelling sites, the world’s oldest rainforest and every piece of infrastructure you could need,” Joanne says.

“The tropical lifestyle and outstanding local attitude, combined with not having to deal with peak hour traffic, ensures this region is genuinely appreciated by all yachts that visit and most often, they extend their stay.”

Already contributing $159m  to the local economy and supporting more than 240 jobs, Cairns is one of the most visited super yacht ports in Australia with vessels staying on average 46 days.

“There was no one from Queensland promoting the infrastructure we had for super yachts in Cairns.”

He says the city now needs a bigger marina to accommodate today’s larger boats, but predicts a buoyant future for the industry.

“We are a safe haven, we have law and order and we have a quality product. The group’s done a wonderful job over the years and we’ve got stronger and stronger,” Dean says.

“The future will be very bright.”

Marine industry stalwart and current board member Bill Millett says Cairns was doing it tough when the seeds of super yachting were first sewn. NQEA’s naval shipbuilding was winding up. Fishing trawlers were being squeezed out of a diminishing industry.

“I developed a passion to help create for a new industry in Cairns,” Bill says.

“I saw that if we could build a superyacht industry that would be fantastic for Cairns and still believe that today. Not just a small portion of Cairns could benefit, but the whole of Cairns. It was all about jobs, jobs, jobs.”

He says our relative isolation has worked in our favour.

“A growing number of wealthy individuals don’t want to be sitting at the likes of Monaco or on the Riviera.

“They are ready to explore the world and its gems. They’re keen to see the parts of the world that aren’t the traditional cruising grounds — where you can moor up and you’re the only boat in the bay and enjoy what our natural environment has to offer.”